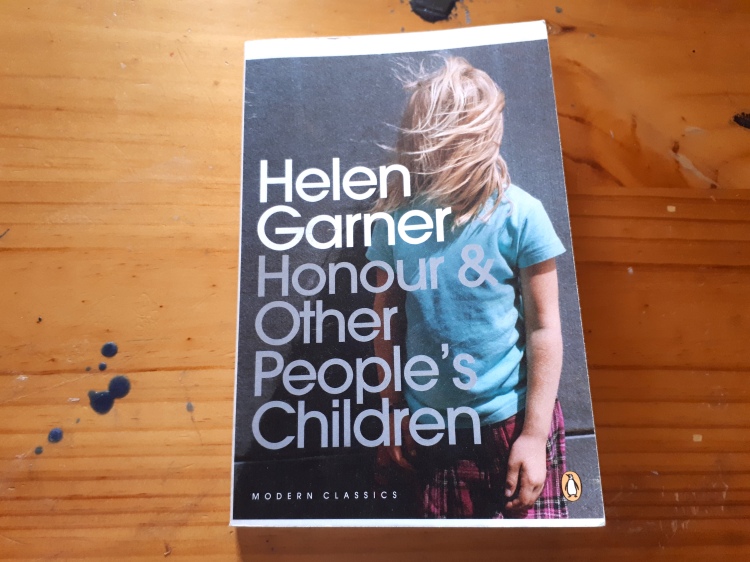 Honour & Other People’s Children by Australian author Helen Garner, is a book of two fictional short stories based on the themes of functional and dysfunctional relationships in nontraditional family units. Both stories explore how families develop in ways that usually go in an unpredictable fashion, as each home environment aims to provide a sense of security idiosyncratic to their household.

Honour is about a separated couple, Frank and Kathleen, who are finally filing for divorce after many years of separation, while caring for their only daughter, Flo. At the same time Frank is planning buy a house with his current partner Jenny, in his attempt to establish a family home for themselves and Flo to live in. While his soon to be ex-wife Kathleen struggles to understand her place in Flo’s life, alongside their family home.

This is a beautifully written bittersweet poetic portrayal of the affects divorce has on all parties, fairly showing all perspectives in this awkward situation. Capturing the ugliness both women, Kathleen and Jenny, portray in the delicate issue that is prevalent in the important role of playing the mothering figures for Flo. Where Kathleen is constantly overstepping the boundaries in Jenny’s home, ignorantly making Jenny feel like her relationship with Frank holds no historical importance compared to the wild events of his past with her. Even though Kathleen has no intention of wanting to be with Frank again, she doesn’t take into consideration how Jenny must be feeling as second partner to Frank and second mother to Flo. Whereas Jenny struggles to understand Flo’s uneasiness in finding her place in their new home together, misinterpreting her disobedience as pure naughtiness instead of helping Flo settle into her new home routine with her and Frank. All the while Frank is clumsily handling both relationships, trying to please both women in the situation for Flo’s sake.  Feeling the emptiness now in her home without Flo there on a daily basis, Kathleen realises that she actually does enjoy being a mother, despite the serious and at times difficult responsibility it has been for her since Flo was born.

The relationships in this short story is a clumsy dance no one really knows the steps to, stepping on each other’s toes at every moment in this time of transition. Garner has crafted a beautiful structure within this story, conveying the messy family dynamics entwined in the relationships of these imperfect people, who come together in love and sincere responsibility for their daughter.

Other People’s Children is an interesting take on the unconventional household of people who have ended up feeling like family in unexpected ways. With adults Scotty, Ruth, Alex and Ruth’s children; Laurel and Wally all under the same roof.

Scotty, Ruth and Alex are just house mates, who live with each other and look out for one another. Due to their life circumstances, they have been brought together under the same roof at this moment in their lives. Ruth and Scotty are close friends who have come to a breaking point in their relationship, where they feel like they can no longer live together anymore. Because they feel like they are growing apart from each other despite their close history. Scotty had even been like a co-parent to Ruth’s children, and feels the loss of them throughout their bickering and eventual separation as friends. Both women were different from the beginning, which is why they were drawn to each other, and complimented one another, at an especially difficult time in Ruth’s life as a single mother.

But now that they’re all changing and progressing in different directions as individuals. Where their once warm and safe household is not what it once was. With Ruth wanting to move out to her own place, with her children and her current lover, she faces the complexities of people in her life and learns with sadness that she can’t always have what only suits her. All the while Scotty let’s Madigan break down her walls and temporarily invites him into her life, despite her fears of intimacy and commitment. But learns throughout their short relationship that he is too much of a boy for her, as the independent woman she has always been.

This book analysed and explored the complexities of relationships within households, following right through to the end, seeing how relationships can truly expire. Garner has a talent for writing extremely human and imperfect characters, with a raw honesty she doesn’t attempt to hide or polish. Her writing is truly refreshing. I particularly like some of the last few lines at the end:

“So this was why people in real life screamed and broke things and grew violent: because the mind let go, and afterwards your body was as loose and fine as a sleeper’s, a dancer’s, a satisfied lover’s. You were empty, all your molecule’s were harmoniously re-aligned. You were skinned, liberated, wise. You were out of reach.”

I'm a writer who wants to share more content, instead of keeping them jammed in many notebooks in fear of anything and everything illogical. View more posts