This is my life. It’s all about that injured little finger life for now.

Just when I thought things are getting a bit more normal, where I was using all 7 fingers and even driving a car – next minute, I’m midway through my second operation, where the surgeon realises he has to repair one of my tendons again.

On Thursday the 28th of February I went into Maroondah Hospital at 7am for Tenolysis surgery on my already injured left pinky finger. The first speed bump encountered was the fact that the anaesthetist couldn’t find a vein in my right arm to stick the cannula in that was required for all the necessary doses of sedation.

He tried once in my wrist, once in my hand and twice in my arm. I’m very used to this, but it’s really uncomfortable to endure. Because it means that he had to poke the needle around in my skin trying to nick the veins he thought he had found on the surface. But my veins are a bit of a tease, they like to trick the nurses and doctors into thinking they’re there, when really they’re too busy mingling with the rest of the body. But another more experienced anaesthetist came by and was able to pin one down in my hand in the first stab, which was a sweet relief.

For the first half of surgery I was only under sedation, along with the numbing of my left hand, where the surgeon successfully performed the intended Tenolysis treatment. Where he separated all of the scar tissue from the tendons, that was causing it’s significant stiffness and hook bent shape that was a result of my first surgery. While he was doing this I felt very awake and weirded out by the numb feelings of him performing surgery on my finger. And there were 3 or 4 moments where I remember crying out in pain, requesting more sedation to be pumped into the ye old cannula.

Once he finished the Tenolysis he showed me my straightened pinky, flesh and all. And just like the open wound it was on the day of the accident, I was not bothered by the internal state of my finger whatsoever.

I remember the discomfort of him cutting into my wrist and the most excruciating pain – the worst pain I’ve ever felt – shooting from wrist down to my middle finger, as he cut the tendon in my wrist. It was so painful I made the most primal sound I’ve ever yelled, and I just remember the surgeon say give her a general anaesthetic, a tube being shoved in my mouth, then I was out.

So now I have another 3 month recovery ahead of me with the same amount of hand therapy appointments again. When I first heard this from one of my hand therapists I wanted to cry as they proceeded to redress my hand and modify my purple splint.

I hit a really low point after that hand therapy appointment on the Friday after surgery.

As I walked out into the waiting area to meet Mum afterwards, I couldn’t even say any words to her. Only when we walked out of the hospital I managed to tell her the disheartening news. And I felt my mind go to a real quiet state of complete despair.

Because before this second surgery I was excited about gaining my independence once more, and working in my cafe job again to help me save up money for a car. Way before this accident even happened I was applying for so many jobs and to my surprise I finally found success in getting this one, but I only got to work there for a month. For that month it felt really good to earn a regular wage along with my fluctuating income as a singing teacher, and finally feel like an independent adult.

But here I am again.

My family, my boyfriend Danny, my friends Emmelyn, Jasna and Emma, were the ones who held me up through the weekend just gone by. Without their comfort and company I don’t think I would have coped with the heavy disappointment and sadness I’ve been experiencing. I was actually blown away by them and the rest of my support network, because they all pulled in tighter and stronger than ever when I received the discouraging news.

Emmelyn decided we needed to do something that Friday night to have fun and take my mind off it, which was to get ice cream from Cold Rock and start my autumn leaves 1000 piece puzzle. Yes, she was thrilled by the mess of fallen leaves on the earth of this forest area we attempted to start piecing together.

Jasna and Emma came over on the Saturday night for nachos, the 1000 piece puzzle, Cards Against Humanity, and more snacks. It was a perfect night of distraction and fun my injured self could be bothered with.

Danny has been there to comfort me as I cry over the phone to him, as well as being able to endure listening to me sing him a terrible version of Candle In The Wind by Elton John 10 minutes after I woke up from surgery, and has just been an all round caring boyfriend when I really needed his encouraging and soothing words.

My family has been rock solid in helping me out with my daily tasks again. I mean this time around we know the routines of how to manage my personal upkeep as a human being very well. Which means it hasn’t been that difficult transitioning back to that one hand life. And of course, their emotional support has been so warm to receive in a time of being more prone to allowing more negative self-talk in my mind.

This weekend has shown me that despite the chaos being thrown into the mix of my life, I have a really strong support network of family, my boyfriend, friends, co-workers and even hand therapists. That even in one of the most disappointing moments of my life my support team pulls in stronger and more reliable than I originally thought they were. It honestly wasn’t that I thought they were weaker beforehand, I just felt like I got to observe first hand people leveling up and gaining super powers right before my eyes. This is just my super cheesy way of expressing my immense gratitude of having them in my life.

I am truly blessed.

Slings are really great at catching food. Lots of snacks for later. 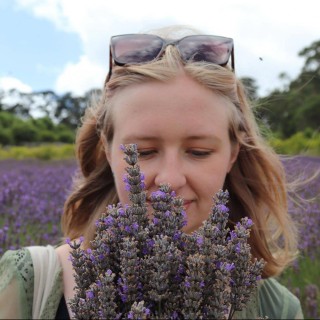 I'm a writer who wants to share more content, instead of keeping them jammed in many notebooks in fear of anything and everything illogical.